Toys “R” Us Store Closings Expected After the Holiday Season

In a USA Today article, “Toys ‘R’ Us Store Closings Expected After the Holiday Season,” Wilk Auslander’s Eric Snyder offered his prediction about the impact the news would have on landlords. 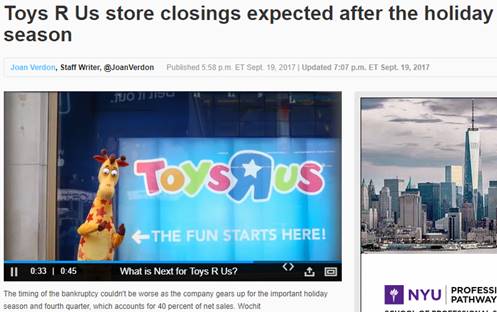 Toys R Us store closings expected after the holiday season

With its bankruptcy filing late Monday, Toys R Us bought itself $3.1 billion in new financing that will allow it to stock and operate all of its stores through the crucial holiday season. But after the holidays are over, store closings are inevitable, bankruptcy experts say.

Toys R Us, in court documents filed in support of the bankruptcy petition, also indicated that store closings and a shift to smaller stores is part of its long-term plan.

The company said it is “currently performing a detailed review of their real estate portfolio” and is identifying poorly performing stores and locations where the rents are too high in order to reduce the retail square footage.

Toys said it was forced to file for bankruptcy 14 weeks before Christmas, and just as it was kicking off its holiday marketing push, because toy vendors who were worried about reports of an impending bankruptcy had begun to demand cash payments before they would ship merchandise.

“The timing of all this could not have been worse,” Toys Chairman and Chief Executive Dave Brandon said in a 47-page statement filed with the U.S. Bankruptcy Court in Richmond, Virginia.

The reports, which escalated in early September, that a bankruptcy filing was coming “started a dangerous game of dominos,” Brandon said. By last week, nearly 40 percent of the company’s toy vendors had refused to ship merchandise without cash on delivery, cash in advance, or in some cases, Brandon said, payment of all outstanding bills. Those actions, he said, left the company with no option but to seek bankruptcy protection.

Brandon said, however, that being able to restructure with the benefit of new financing that will allow it to invest in its stores makes this a new beginning for the 69-year-old company.

But bankruptcy experts said that new beginning will also come with some pain.

“No landlord is going to be spared,” predicted Eric Snyder, chairman of the corporate restructuring department of New York law firm Wilk Auslander. The fact that Toys R Us hasn’t announced any store closings yet indicates that it is going to contact all the landlords and tell them if they don’t reduce the rent or improve the terms, “we’re going to leave.”

“They’re going to start from scratch and look at all the leases, and they can save significant money,” Snyder said.

In the current environment, with many retailers closing stores, Toys R Us has a lot of leverage with landlords, he said. He expects landlords to be willing to negotiate “because no one wants them to leave,” he said. “Even though we’re in good financial times, we’re in terrible retail times,” he saidTop of FormBottom of Form

Brick-and-mortar stores are becoming “unsustainable” for Toys R Us and a growing number of retailers, said Patrick DiNardo, an attorney specializing in bankruptcy and creditors’ rights litigation for the firm of Sullivan and Worcester in Manhattan. “Unfortunately,” he said, “I think we can expect to see many more shuttered retail locations in our near future,” and that could trigger a commercial real estate meltdown, he said.

Linda Parry Murphy is already feeling the pain from the bankruptcy filing. Her company, Product Launchers, which is based in White Plains, New York, with a satellite office in Manhattan, is a sales representative and distributor for manufacturers and imports who sell to Toys R Us. Her clients are owed more than $1 million by Toys, and it looks like they will receive only a small fraction of that amount as a result of the bankruptcy.

“Our clients are the ones getting screwed,” she said. “They’re the ones owed millions and will be lucky to see 10 cents on the dollar,” she said. “Not every supplier is as large as Mattel or Hasbro, who can more easily absorb this blow.”

Mattel is the largest non-bank creditor listed by Toys R Us in court documents. It is owed $135.6 million by Toys.

Parry Murphy learned Tuesday that she must file a claim for goods and services with the Bankruptcy Court and that Toys is advising vendors to consult with an attorney.

“An initial consultation with a bankruptcy attorney on behalf of our clients is costing us $500 — and that’s just for the first chat,” Parry Murphy said. “Completion of the case is likely to run tens of thousands of dollars — not to mention the hundreds of man hours it will take to gather and submit documentation,” she said. “Small suppliers simply cannot afford that kind of expense.”